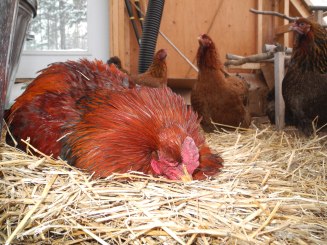 Bam Bam the rooster is dead. Succumbed to something we don’t know.. A few days of not moving much and looking very low and this morning we find him lying on the ground, still breathing, but lying on his chest his head on the ground.a few hours later a big last breath and then he moved no more.   Regal, punctual, loyal; always there to mark the sunrise, to stand guard over his flock, to wake us up! All with his sad eyes, not matching his strutting dominance. Such a noble presence. Shining green and russet brown, speckled black, huge feet, small comb to protect from frosts after years of selective breeding the Patridge Chantecler a perfect chicken for our northern climate. No more fertilized eggs, the whole flocks future now in jeopardy. Without a Coq’ the end of the flock is inevitable. And still this essential practical animal is illegal because according to town bylaws roosters are ‘strictement interdit’. How unwise and arbitrary our governing bodies where a Rooster represents freedom; eggs, food, a continued cycle of food security while they bleat on continually about the areas food insecurity and hold food drives where officials in uniforms like fireman are made to stand with buckets to collect change on street corners…. a simple solution struts his stuff unaware. Bam Bam paraded majestically, he got what he wanted from his hens and especially from his favourites. He ate right until the end. Supposedly 5 his getting on for a Rooster. The hens scratch on. the mourning already over and the morning always going forward